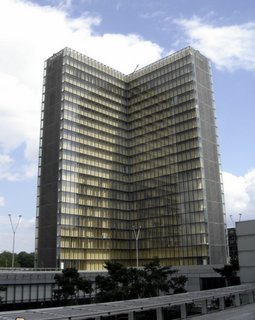 The Bibliotheque Nationale de France, the new French National Library at Tolbiac, was the last of François Mitterand's "grand projects".

Designed by Dominique Perrault and covering 7.5 hectares it is composed of four glass and steel towers of 24 stories, 80 meters, each, modeled to give the impression of open books.

The towers of the Bibliotheque Nationale de France are named. They are the tower of Laws, of Letters, of Numbers and of Time.

Construction of the Library began at the end of 1990 and was completed in March 1995, at the cost of 8 billion francs (5.2 billion euros).

It has a public seating capacity of 1,600 readers, many of which are afforded a view of a two-level, garden-styled courtyard. The research part of the library seats 2,000.

The public reading room opened in December 1996. Though rife with difficulties when first opened (a librarian strike, computer glitches, leaking ceilings and book-shelves exposed to sunlight) it has since been recognized as one of Europe's most user-friendly academic facilities.

Ironically, during the strike, many of the technical and physical problems of the library were resolved.

The collections of books and periodicals are divided into four departments:

There is also a department for the audiovisual material and one that specializes in bibliographic research.

The Bibliotheque Nationale de France is closed on Monday and on holidays. Admission cards must be purchased to use the reading rooms at the cost of 3.50 euros.

Persons under the age of 16 are not permitted in the library.

The research library is open on Monday from 2 p.m.-8 p.m. and on Tuesday-Saturday from 9 a.m.-8 p.m. Persons under 18 years of age are not permitted in the library.