The Jardin Atlantique, the Atlantic Garden, is a roof-top garden, located on the roof of the Montparnasse train station, Gare Montparnasse.

Trains from Gare Montparnasse are destined for locations on the Atlantic coast of France.

In the opposite direction, trains coming from stations on the French Atlantic coast arrive in Paris at Gare Montparnasse. Hence, the Jardin Atlantique was designed with a maritime theme. The architects of this Garden were François Brun and Michel Péna.

The work on the Jardin Atlantique, the Atlantic Garden, began in the early 1990s and was inaugurated and open to the public in 1994. It covers 3.5 hectares, 8.5 acres, 34,200 square meters and completely covers the roof of the quays of the station, the first 100 yards of rail lines.

Being a roof-top garden entailed many special considerations such as the infrastructure of the roof which allowed daylight into the train station, the ventilation of the rising smoke and exhaust from the car-park, as well as the mechanical constraints of weight on a roof.

The trees of the Jardin Atlantique were planted directly above the pillars of the station. There are large vents in the roof which allow for the escape of the fumes and exhaust from the car-park and others which allows for sunlight to reach the quays of the station and also provides ventilation.

The Jardin Atlantique is bordered by four walls of tall buildings. There are no horizons, no sweeping vistas offered here. That is another of the surprising elements of this roof-top Garden. It may be on a roof, but it is enclosed by higher roofs, including the tallest building in Paris, the Tour Montparnasse. 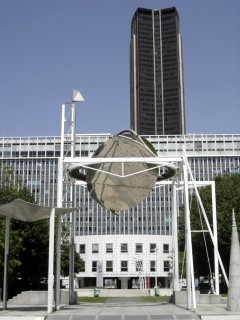 Rooftop Oasis of the Jardin Atlantique

This "enclosure" urbanizes the feel to the Jardin Atlantique. The modern steel structure in the middle of the Atlantic Garden increases the inner-city ambiance. Even the manicured sharpness of the Central Lawn, cleanly divided by a central cement walkway induces a sense of control and structure.

All this is in contrast to the overflowing plant-life that is found here, the wandering, curving boardwalks, the casualness of the sun-bathing deck and the sounds of waterfalls and fountains.

The greenness of the Garden is striking and in sharp contrast to the grey and whiteness of the surrounding buildings. The impression of seclusion from the City evokes the feeling of having found a haven in the middle of a sprawling metropolis. 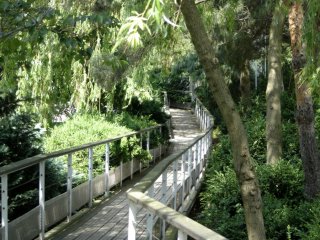 There are several ways to get to this roof garden.

One entrance is through the Gare Montparnasse. On the second floor of the station is a stairway in the far left, eastern, corner which leads to the car-park and to the Garden on the roof.

There are two free-standing, glass-sided elevators that go to the Jardin Atlantique.

These elevators, however, are not always working.

For the elevator on Boulevard de Vaugirard there is a stairway available inside the building. The elevator on rue de Ctd. René Mouchette does not have an available stairway.

There is also access to Jardin Atlantique from the south side from Boulevard Pasteur and Place des Cinq Martyrs du Lycée Buffon, via Allée de la Deuxiéme Division Blindée, Alley of the Second Armed Division. 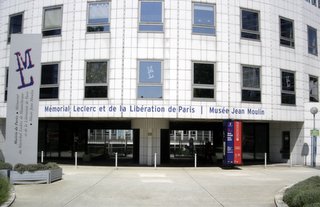 Museum of the Liberation of Paris

The Second Armed Division is the military unit commanded by General Maréchal Leclerc during 1943-1946 and which was the first unit to enter Occupied Paris. The Allée leads directly through the Jardin Atlantique to the Mémorial du Maréchal Leclerc de Hauteclocque et de la Libération de Paris - Musée Jean Moulin which is on the north end of the Garden.

The Allée de la 2eme D.B. begins on the south end with swaths of heather on both sides. On the north end are two large plantings of lavender. In between, the Allée is bordered with a variety of trees including a Red and a White and a Hungarian Oak, and a Chilean False Oak, a White and a Red and a Common Ash, a Black Walnut, a Yellow Chestnut, a Virginia and a Provence Mecocoulier, a Eastern and a Western Platane, a Jeffery and a Serbian Pine and many others.

Allée 2eme D.B. runs down the middle of the Central Lawn and divides the Jardin Atlantique into two halves.

On the western side of the Garden is a sunning deck which runs the length of the Central Lawn. Bordering this deck is a run of several tennis courts and a couple of ping-pong tables. 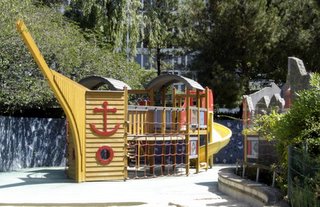 On the eastern side of the lawn is a children's playground and an elevated boardwalk which passes through a small forest of Weeping Willows and Pines and Cedars and masses of evergreen shrubs such as holly and yew, ferns, hostas and astibilles and irises and a variety of ivys and vines. There are also reeds and wild grasses growing from a sand dune area. This boardwalk also accesses some beautifully individualized garden and architectural spaces. These specialized spaces can also be approached from the Central Lawn.

Some of these areas are named: 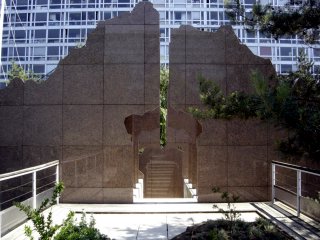 -the Pavillon des Roches, the Rock Pavilion, which is a sitting area separated from the main of the Garden by staggered walls of cut flagstone; 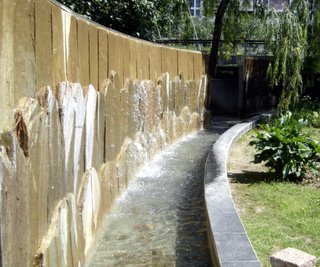 -the Pavillon des Vagues Bleues, the Pavilion of Blue Waves which is an elevated sitting area above a waterfall cascading down flagstones; 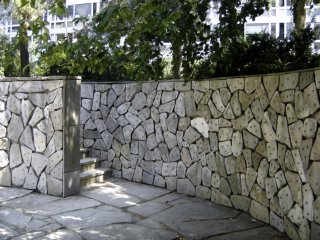 -the Room of Silence is a circular area formed by walls of flagstones which produce lovely sounds when tapped; 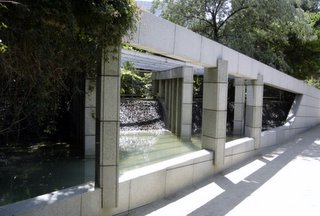 -the Room of Moisture is a series of four small waterfalls which cascade down four short walls which are embedded with small stones. 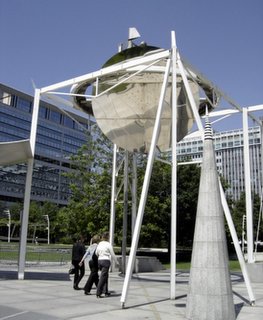 Standing in the middle of the Central Lawn is a giant steel structure, a meteorological Observatory, called the Island of Hespérides. Its four posts support a large suspended circular mirror. At each of the four posts a specific meteorological observation is conducted.

The northern post has an Anemometer which measures wind velocity and direction.

Return to Top of Jardin Atlantique