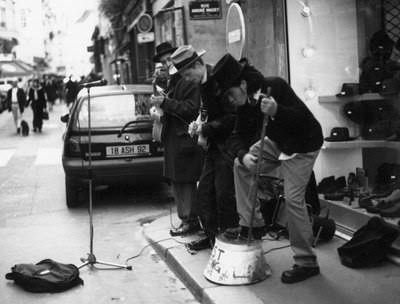 June 21, Summer Solstice, is the day and night of the Music Festival in Paris, the Fete de la Musique. It is simply one of the best street parties in the world.

It begins in the afternoon with organized groups of children singing in the parks. By evening, the music pours from every possible venue; the street corners of the Champs Elysee, the parks, the churches, the Louvre, the plazas and the courtyards and from almost every single bar and café.

I went to the Place de la Bastille, one of the larger of the outdoor venues for the Fete.

Boulevard Richard Lenoir leads away from the Place de la Bastille with a large walk-way where a market takes place a couple of times per week. A stage was set up at the Place-end of the street. In front of the stage was a growing crowd of people. I kept some distance towards the back and leaned up against a tree.

Sitting in front of me were a couple of street drunks, drinking expensive beer. Apparently, they had saved up for the occasion. The stage announced a band no-one had ever heard of, but, these guys cheered as if the Rolling Stones were taking the stage. The band started to play.

Off to the left of me was a 3 year-old boy was dancing like he totally knew what he was doing. He started dancing in front of a shy 2 year-old boy who was clinging to his stroller. They were soon chasing each other in circles while the 3 year-old stopped occasionally to rock-out.

Eventually in their circle running, the 2 year-old fell down. The 3 year-old crashed on top of him and he immediately started crying, feeling responsible, not wanting to hurt his new friend. Noticing that the other boy wasn't hurt, he stopped crying and started dancing again. Their mothers then came to collect the boys and they parted.

Next to me was a group of people sitting in a circle. A guy walking past this group bent down and pressed his cold beer can against the bare back of one of the young women sitting there. She shrieked and all her friends laughed. The guy with the beer kept on walking, laughing to himself at his harmless joke.

The sun was going down. The tops of the buildings were catching the setting light. Beautiful white clouds floated through a deepening blue sky.

A new band took the stage. It was a rap-band and the first song totally rocked. The second song totally sucked. By the third song, I was making my way out of there.

Walking away from the main crowd, I soon came upon a woman singing Edith Piaf songs. She had drawn a small crowd of appreciative people who swayed back and forth as she sang.

I walked on to the Place des Vosges. Under the arcades I listened a quintet singing ancient songs in acapella. At the other side of the Place, I listened to a small chamber orchestra play under the darkening evening sky.

Walking on, I found a gazebo-styled tent that was set up in front of the Mayor's Office of the 1st Arrondissement. A band of musicians played and many people had gathered round to listen.

In this plaza is a large sidewalk ventilator-grill for the Metro trains running underneath or for the surrounding office buildings, or both.

An 11 year-old boy discovered that if he held his light-weight windbreaker-jacket over the grill and let it go that it would fly up about 25 feet before falling back down. He was absolutely enjoying the flight of his jacket.

Soon, other children joined him and were throwing their jackets into the air, watching them drift overhead. Some adults followed suit, sending their scarves up, paper cups took flight, a few paper airplanes were folded and they took to the air.

A couple of women had fun pretending to be Marilyn Monroe for brief seconds. Men let their shirts puff out and played with their suddenly air-rounded bellies.

The ventilator-grill had become the center of attention and amusement. The boy who started it all continued to let his jacket fly amongst all the others. He seemed pleased that others shared his fun, even if it did get a little crowded around him.

Looking at the fun he inspired, I thought of him as a magician. Music and magic happen together at the Fete de la Musique in Paris.

It was time to eat something, so I went to the Jewish Quarter in the Marais district. Even though it was Saturday, Shabbat, I knew there would be one or two renegade falafel shops open with lines of people from here to Lyon.

Standing in line with me at one of those shops was a couple from Berlin and in front of me were some folks from New Jersey. We found ourselves all talking together about the Bush regime but we quickly moved on to topics more amusing. It was a festival night, a time to celebrate, a time to laugh and to dance for those who could not.

With sandwich in hand, I roamed the streets of the Marais, amongst the thousands, amongst the children in Superman and Spiderman costumes and adults walking on stilts, friends dancing in their circles and strangers dancing with each other, guitar players performing from the windows of their apartments, American Indians conducting a small pow-wow and even an organ grinder on a quieter corner....